The power of the analytical blank.

Learn more about the factors that impact the analytical blank, digestion techniques, and Milestone’s Clean Chemistry products designed to help you maximize your ICP-OES and ICP-MS data.

“In the preparation of high purity reagents, there is only one significant and practical choice for the method of purification: sub-boiling distillation.” – US EPA SW-846, Chapter 3, Update IVB.

Reagent contamination increases the background concentration of analytes present in a sample. Because of this, laboratories purchase expensive high-purity acids for trace metal (element) analyses. With small samples sizes, it is critical to keep blank levels low for good reproducibility. Milestone’s duoPUR and subCLEAN, sub-boiling distillation systems allow laboratories to make their own high purity acids at dramatically reduced costs.

The chemical reagents used during the analysis are an important source of the analytical blank. Sub-boiling distillation has been demonstrated to be the best method of acid purification. It uses contactless infrared lamps to vaporize the surface liquid at a temperature typically 20 °C below the boiling point.

With conventional distillation, the boiling of acid generates aerosolized particles, resulting in contamination of the distillate. In contrast to this, gentle surface evaporation during sub-boiling distillation prevents the formation of spray or droplets, yielding high purity acids. 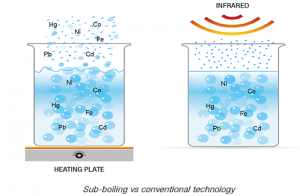 duoPUR – Quartz Sub-Boiling System The duoPUR consists of two quartz distillation units. Each unit contains two infrared heating elements, a water-cooled condenser, a high-purity PFA collection bottle, and a fully automatic acid loading/discharge system. The vaporized liquid is collected on the inclined water-cooled condenser and drips into the collection bottle. The distillation process is microprocessor controlled, allowing the user to set the distillation time and power level by using a compact control terminal with easy-to-read, bright, full-color, touch-screen display. Distillation rates range from 50 to 400 mL per hour, depending on the power setting and cooling temperature. 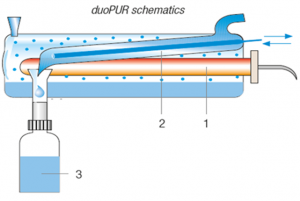 subCLEAN The Milestone subCLEAN is a compact and easy-to-use sub-boiling system, where all parts in contact with acids are made of high-purity fluoropolymers. The subCLEAN is, therefore, suitable for the purification of HF, as well as for HNO3 and HCl. Furthermore, it does not require cooling water or a chiller, as acid vapors rapidly condense into a collection bottle by forced air cooling.

The duoPUR and subCLEAN offer an alternative to the purchase of expensive high purity acids for trace elemental analysis. 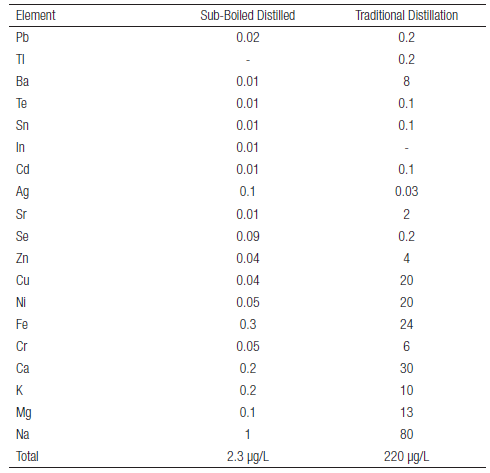 How much will you save each month?

*Sample pricing based on J.T. Baker Chemical and Sigma Aldrich – 2022

How Much Will Sub-Boiling Distillation Save You Each Month? DOWNLOAD